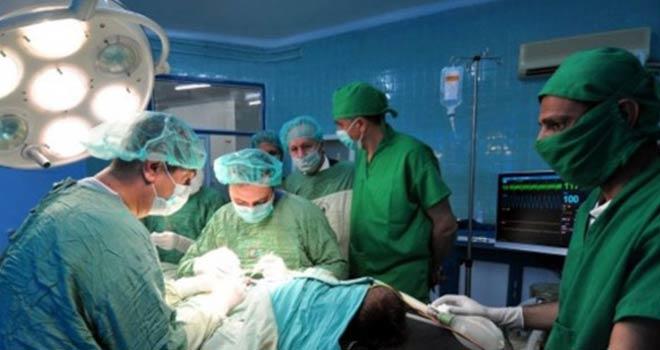 Myomectomy, the removal of abnormally and fast growing myomas using the closed surgical method is called laparoscopic myomectomy. Myomas found in the uterus are benign tumors usually measuring between 1-15 cm in diameter and originating from the uterine tissue.

Myomas are the most common tumors of the genital organs that may arise one in every three women aged above 35 years. Most myomas are identified by obstetricians and radiologists during ultrasonography of the uterus. Numerous treatment options are available for patients with myoma.

MRI examination should absolutely be performed while evaluating these treatment options; and this evaluation should be made based on MRI findings. The surgery can be performed with open method, as well as closed method.

The procedure is carried out through only a few incisions made on the abdomen using instruments. Accordingly, if laparoscopic myomectomy is considered appropriate for the patient, myomas, which are found in the uterus and cause severe bleeding, can be intervened with hysteroscopy.

It is the removal of these tumors, in other words myomas, through a few small incisions made on the umbilicus and lower parts of the umbilicus using tubular instruments with camera inserted into the abdomen.

It is performed in cases where myomas are close to the outer surface of the uterus and larger than 10 cm in diameter, and four myomas are present at most. The operation is performed under general anesthesia and takes approximately 1-2 hours. You may require to be hospitalized one or two days after the surgery.

The healing process of the patient is easier and shorter compared to the open surgery. It takes approximately 1-2 weeks depending on the way of performing the operation. However, as in open surgery, the risk of recurrence is also always possible in laparoscopic myomecyomy. In short, it is the procedure of opening the uterus through the umbilical area, entering the area with laparoscopic methods and removing the myomas.

If the patient’s myoma exceeds 5 cm, causes excess bleeding due to pressure on the uterine membrane during menstruation, causes frequent urination and constipation problems, is growing fast and causes pain, causes termination of pregnancy, disrupts the uterine anatomy, causes infertility and is in a form that may prevent to have a baby, doctors use laparoscopic myomectomy method.

The Advantages of Laparoscopic Myomectomy

Laparoscopic surgery has some proven advantages compared to open myemectomy. All these advantages are associated with much smaller incisions used to access the site in laparoscopy compared to laparotomy incisions.

Depending on the conditions of this operation, laparoscopic myomectomy operation is performed in a more sterile way than open myomectomy, and therefore, the risk of infection is minimal.

In conclusion, laparoscopic myomectomy has the advantages such as faster recovery and shorter discharge, minimal pain compared to open surgery, smaller surgical scar due to smaller incisions made, lower risk of infection during operation, lower risk of intraabdominal adhesions that may arise after the surgery, minimum risk of hernia and bleeding, quicker return to daily activities.

But this is an exceptional case. The most important disadvantage of laparoscopic myomectomy compared to open surgery is that the success is directly linked to the experience of the surgeon who will perform the surgery.

Laparoscopic myomectomy, ie closed myomectomy method, is not suitable for every patient. Ineligible patients are patients with a myoma size of 9 or 10 cm and with more than 4 myomas. Such patients cannot undergo laparoscopic myomectomy. However, the decision in this regard of course depends on the impression and experience of the surgeon who will perform the operation.